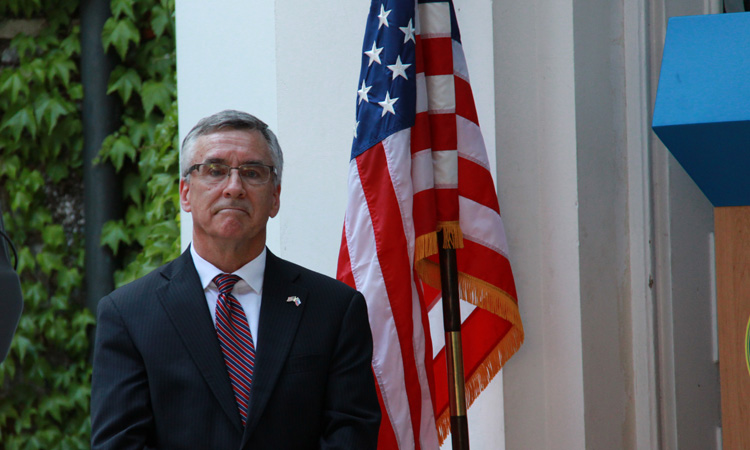 Thank you very much for coming this evening.

It has been my great honor to represent the United States in Slovenia and a particular honor this year as the Slovenian people celebrate the 25th anniversary of their independence.

Over the past few months, and especially this past week, we all have been recalling what happened here 25 years ago, thinking about the brave actions taken – by leaders, by defenders, by citizens – to chart a new path for a new country.

And tonight, I welcome you to my country’s national day celebration – the 240th anniversary of the signing of the Declaration of Independence in Philadelphia, Pennsylvania.

The United States has come a long way since our 25th anniversary. When we were 25 years old, in 1801, we were on our second constitution and just inaugurating our third president. That was after a contentious election which had to be finally decided by the House of Representatives.  It took them a week and 36 ballots to elect Thomas Jefferson as our third president.

I don’t bring this up as a segue to discussing our current presidential campaign – as a career diplomat, that can only get me in trouble!

Rather, I bring it up as a reminder of how incredibly far we’ve come. At 25, my country was a young nation still finding its way. But with the optimism, creativity and energy of our people, and our dedication to principles, the United States succeeded, even as we continue to grapple with our own internal challenges.

At 25, you all have every reason to be incredibly proud of Slovenia. Your country is a member of the world’s most successful security alliance and of one of the world’s most prosperous economic blocs, even taking into account recent events. The United States is proud to count Slovenia as an ally and a friend.

So I congratulate the citizens of Slovenia. Čestitke!

And now some thank yous:

It is a big event and every year we strive to do something new and interesting to honor our guests and the relationship between our two countries.

This year I’ve spent a lot of time reflecting on what connects the United States and Slovenia, learning about the ties that already exist, and working to cultivate new links between our countries and new partnerships between our peoples.

The depth of our relationship is striking.

Take, for example, the amazing success story of the Gorenc brothers who were born in Ljubljana, immigrated to the United States as children, and grew up to be senior U.S. military generals, one of whom is now in charge of the NATO Air Forces in Europe, the forces that help secure his birthplace. It was a pleasure to welcome General Gorenc here in May to meet with the Prime Minister and to address Slovenia’s graduates of U.S. military academies.

Another inspirational example is Mark Simonitsch, an American who came back to Slovenia to trace his roots and then fell in love, with not only the country, but with your bees. Today Mark is importing Slovenian-made beekeeping equipment to the United States in large quantities and creating a community of American beekeepers who adore their Slovenian bee hives.

I had the pleasure to climb Mt. Triglav last September, but equally delightful, on my trek across the Transverzala, was the opportunity to visit a gorgeous new bivouac, high on the side of Mt. Skuta, which was designed by a team of students from Harvard University under the direction of their Slovenian mentor from OFIS Architecture here in Ljubljana.

I’ve met a growing number of business people and entrepreneurs who are pushing the edge of innovation, increasing their exports to the United States, and even investing there. Robert Grah’s innovative lighting company is literally shining Slovenian light on the streets of American cities.   Know that by working together we can find ways to reduce obstacles to trade while also maintaining high standards, to create more economic opportunity, and to increase trade between our countries.

Something else that clearly connects Slovenians and Americans is our love of nature and the outdoors. This year marks 100 years of the U.S. National Parks Service, and that anniversary inspired us to partner with National Geographic Slovenija and Tourism Ljubljana to organize an exhibition of photographs of our national parks to celebrate this shared value. The display has had tens of thousands of visitors in Tivoli Park over the past few months, and you can see a selection of the photographs here tonight.

The exhibition showcases Slovenians’ and Americans’ appreciation and respect for our countries’ landscapes. I have been struck by how many Slovenians I’ve met who have told me of their experiences in Yellowstone, or Yosemite, or the Grand Canyon. And of course, my friends and family back in the United States cannot get me to stop talking about my enthusiasm for Slovenia’s mountains, lakes, and forests.

To conclude, what I’ve come to understand is that the relationship between Slovenia and the United States is a very personal one. We sometimes disagree, but much more often, we agree.  We can and do learn from one another. And in many ways, we bring out the best in each other.  Our shared values transcend our differences.

We deeply value our relationship with Slovenia. We share your dreams for a more just, prosperous, and democratic world, even as we face together an array of critical challenges in Europe and across the globe.

With that, I propose a toast to the enduring friendship of the United States of America and the Republic of Slovenia.