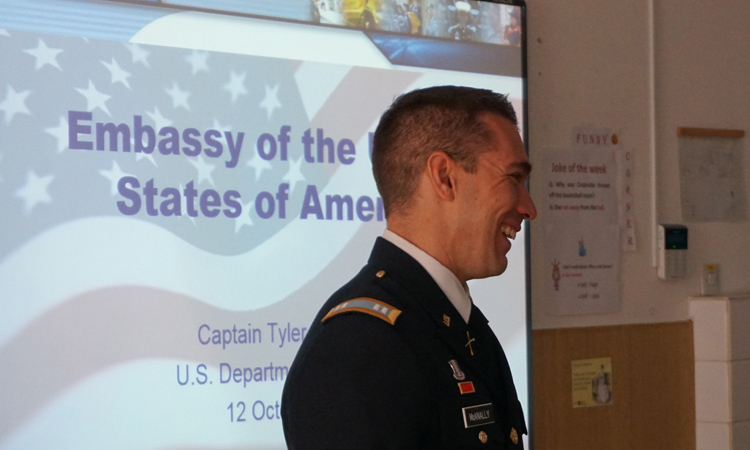 Various American diplomats from the U.S. Embassy visited six Slovenian schools in October. General Service Officer Julia Stanley and Marine Security Guard Nicholas Jackson visited OŠ Stična branch school in Višnja Gora and had a lively discussion with 40 middle school students. Captain Jonathan Tyler McAnally visited 2 middle schools, one in Dobrepolje and the other one in Mojstrana, where he offered an overview of the Ambassador and embassy, introduced his hometown of Jackson,Tennessee, and compared the United States and Slovenia. The Embassy’s Information Management Officer Patricia Rainey visited I. OŠ Žalec to be a guest at their 2017 Language Market and spoke about the embassy, life in the U.S and her own childhood all over the world.  Regional Security Officer David Gallagher and and Marine Security Guard Nicholas Jackson visited OŠ Jožeta Kranjca where the students role-played real situations the embassy has faced. Brittany McAnally was invited to visit Izola High School, which teaches tourism and economy. Brittany compared her life in Slovenia and the United States and shared her experiences as a tourist in Slovenia.