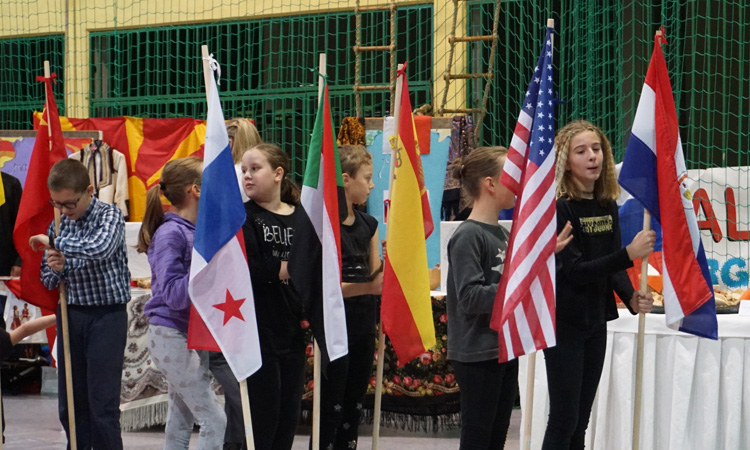 Embassy speaker’s program engaged youth in five different Slovenian schools in November.  American diplomats discussed American society, values, and culture with the students. In two events, we were even fortunate enough to meet with the Mayors of the towns we visited!

As we do every year, we participated at the OŠ Komenda Moste English middle school English language weekend. Stephanie Barrett-Zebre discussed the diversity of the United States of America and focused on her experience living in the state Hawaii. She also answered many students’ questions, many of them about living worldwide as an American diplomat.

Damon Ashcraft visited I. OŠ Žalec as a guest at their multicultural festival and spoke with a class of English language students about life in the United States. Damon also introduced his home state Utah, its beautiful national parks, and its religious diversity. He also briefly talked about California and some countries in which he had traveled.  The students had lots of questions for Damon, on a wide array of topics.

To celebrate the 5th anniversary of cooperation between the school and the U.S. Embassy, OŠ Škofja Loka students prepared an entertaining program of sketches, songs, and dances.  Damon Ashcraft from the embassy told the group about himself, his career, introduced his home state Utah, and answered the students’ questions.

Political Officer James Peranteau visited 100 middle school students at OŠ Škofljica to introduce the United States, its diversity and history.  He also spent an hour with students and teachers discussing a wide range of topics in the U.S. The majority of questions were about food, way of life, schools and life as a student in America.

In order to promote the benefits of international education and exchange programs worldwide during the International Education Week, Deputy Public Affairs Officer Brian Street and Darinka Trček from the EducationUSA at the Public Scholarship, Development, Disability and Maintenance Fund of the Republic of Slovenia visited the International School at Gimnazija Bežigrad. After introducing study in the U.S. and the EducationUSA information center in Ljubljana, they fielded students’ questions.