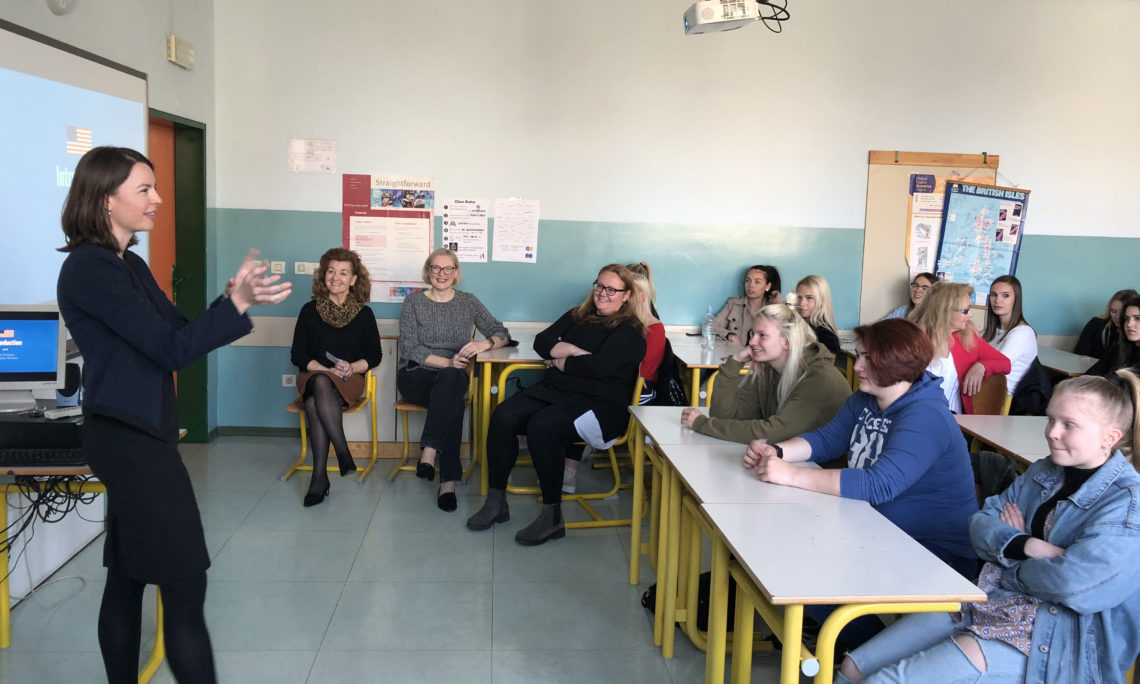 Economic and Commercial Officer, Dr. William Don Baker visited Gimnazija Franc Miklošič, a general high school in Ljutomer that hosted an international debate club attended by 140 participants from Slovenia, Croatia, Bosnia-Herzegovina, the Czech Republic, Bulgaria, the Netherlands and New Zealand. Upon the school’s request, Dr. Baker discussed entrepreneurship, American entrepreneurs, small businesses, start-ups, and how social entrepreneurship can change society. The students were most interested in how entrepreneurs start small businesses in the United States, and how Americans and Slovenians cooperate in the field of entrepreneurship.

Dr. Baker also visited Srednja zdravstvena šola Murska Sobota, a Health Care High school in eastern Slovenia. Dr. Baker focused on some of American history’s milestones, a few of America’s most unforgettable Presidents, and the socioeconomic characteristics of the U.S population. He also briefly introduced the U.S. school system, and his home state of Arkansas, with an overview of key facts, geography, points of interest, and famous Arkansans, including former President Bill Clinton.

Chargé d’Affaires Gautam Rana met with the students from Gimnazija Škofja Loka at EU Parliamentarian Lojze Peterle’s Office in Ljubljana. The Chargé d’Affaires described the embassy’s activities and offices and presented some facts about the United States. The students asked him many interesting questions,such as how the U.S. system of government works, how to become a diplomat, the roles of a diplomat, and how diplomats convey official policy.

Regional Security Officer David Gallagher and Marine Security Guard Sgt. Wyatt Mattingly visited Gimnazija Slovenske Konjice, a high school outside of Ljubljana. They presented U.S Embassy activities in an interesting way, whereby the students played the role of the diplomats and tried to solve specific challenges, an exercise the students greatly enjoyed. The students asked intelligent questions and were eager to know more about the health care system, genetically modified food and the use of pesticides the United States.

EU Parliamentarian Lojze Peterle’s Office in Ljubljana hosted high school students from the School of Economics from Celje and American diplomat Brian Street, who discussed with students some fun facts about the United States and U.S. Embassy roles and activities. He also discussed the life of a diplomat, and how U.S. diplomats are hired.

Political and Economic Counselor Laura Anderson visited two high schools in Nova Gorica. 150 students at Gimnazija Nova Gorica discussed with Ms. Anderson the activities of the U.S. Embassy in Ljubljana, life and work as a diplomat, the qualifications and education needed to become a diplomat, and the advantages and disadvantages of study in the United States.

Ms. Anderson talked with about 50 students of School of Economics in Nova Gorica about their future education and professional careers. The students were interested in the U.S. health insurance system, and U.S. Presidents and asked Ms. Anderson to recommend which federal state she would recommend for a visit.