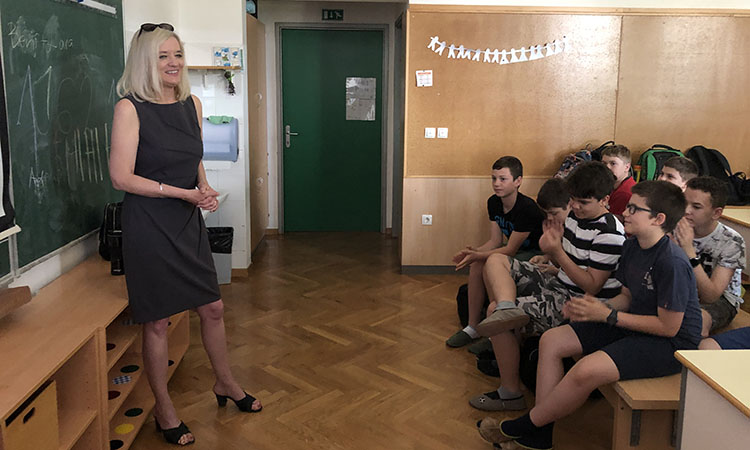 The U.S. Embassy’s Defense Attaché, Lieutenant Colonel (LTC) Klaudius Robinson visited a middle school in Ljubljana, OŠ Toneta Čufarja. His presentation on the State of Hawaii brought some refreshment to the classroom on a hot summer day. Since LTC Robinson lived in Hawaii while attending high school, he enriched the presentation with his own adventures and experiences there. The students asked him a lot of questions and wanted to know more about Hawaii, especially about the volcanoes! They were also curious about sports that are popular in the United States. Since LTC Robinson was wearing a U.S. Army dress uniform, the students wanted to know everything about it, including the ribbons and decorations that military service members earn during their lives.

Public Affairs Officer J.B. Leedy discussed her life as a diplomat with the students of OŠ Ljubljana Polje and showed them a presentation with brief and interesting facts about the United States. A lively discussion with the students followed. They wanted to know more about ethnic food in the United States, sports, and national parks. However, they were also interested in more serious topics like the U.S. political system, presidential elections, political parties in the United States, and the process of how an Ambassadorial nominee is confirmed.

The last school we visited this school year was the middle school OŠ Frana Erjavca in Nova Gorica. Stephanie Barret-Zebre who is also a former resident of Hawaii, introduced 65 students to her favorite state. The students had a lot of questions on Hawaii during her presentation and she was awarded with a loud applause after she finished. She also briefly introduced her current home state of Colorado and told the students that she has lived or visited more than 34 countries. The students also asked questions about U.S. Embassy activities and the life of a diplomat.