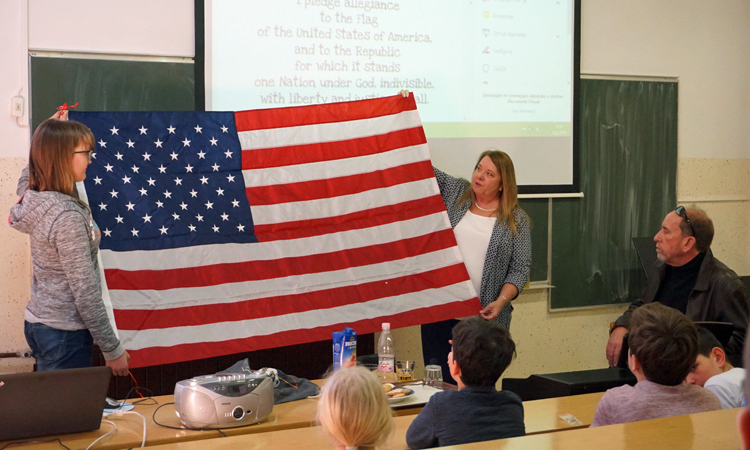 Biodiversity and how America uses its land were the topic that Public Affairs Officer J.B. Leedy discussed with the college students at the Bio-technical Educational Center in Ljubljana.

Julia Stanley, the Embassy’s General Services Officer, visited OŠ Polzela to answer the students’ questions about American teenagers’ way of life, fast food and sports in the United States. The students also wanted to know whether life in the United States is just like it appears in the movies (and the answer is that it depends on the movie!).

Black History Month, observed every February in the United States, was introduced to middle school students in Ljubljana by Deputy Public Affairs Officer Brian Street. He explained the history of racial segregation in the United States, and the importance of Dr. Martin Luther King Jr. and Rosa Parks in fighting for equal rights in the United States. Brian also discussed American culture and answered many students’ interesting questions.

Mrs. Susan Baker visited the High School in Domžale to introduce the students to the American Civil War and President Abraham Lincoln’s critical historical role in preserving the Union. She also talked about the Emancipation Proclamation and its importance in ending slavery in America. She explained the importance of the 13th amendment to the constitution, and how it was passed and ratified. The students also learned about President Lincoln’s death and his important legacy of a united nation.

Economic and Commercial Officer, Dr. Don Baker—a former professor—discussed the United States with the middle school students of OŠ Pirniče. Dr. Baker focused on some of American history’s milestones and a few of America’s most influential and unforgettable Presidents. He discussed the American education system and introduced his home state of Arkansas, with an overview of key facts, geography, points of interest, and famous Arkansans, including former President Bill Clinton.

Julia Stanley and Doug Allen visited the students at OŠ Koroška Bela. As Ms. Stanley has lived in 15 different countries and nine of America’s 50 states, she recounted many interesting stories and adventures that she conveyed to the students. She also talked about the U.S flag and the Pledge of Allegiance. Mr. Allen spoke about his home state of Mississippi.

Chargé d’Affaires Gautam Rana visited EU Parliamentarian Lojze Peterle’s Office in Ljubljana to meet with the students from the Ljubljana High School of Economics. CDA Rana described the embassy’s activities and offices and presented many interesting facts about diversity in the United States. The students asked him many questions about current events and U.S. policies, participating so eagerly that the class went twenty minutes too long!