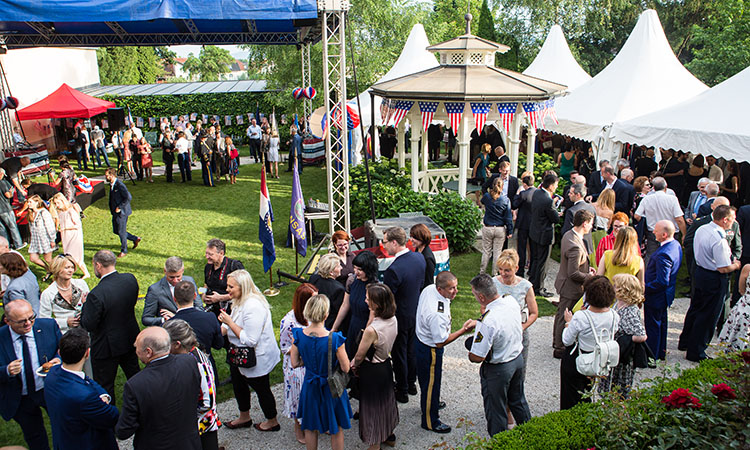 “When the Apollo 11 astronauts left the surface of the moon in July of 1969, they left a piece of the lunar lander on the moon. Attached to that lander was a plaque that read, in part, ‘We came in peace, for all mankind.’ Today, as we celebrate the 243rd birthday of the United States of America, we choose to honor this sentiment of peace and understanding, and the spirit of Apollo 11. We choose to honor the curiosity, the dedication, and the view to a brighter future that this endeavor represents. And we’re proud to do so among our friends in Slovenia.”

With these words, former Charge d’affaires Gautam Rana welcomed hundreds of guests to the U.S. Embassy’s annual Independence Day Celebration in Ljubljana. This year’s event was dedicated to commemorating the fifty-year anniversary of the Apollo 11 mission in July of 1969, and one of the United States’ most thrilling achievements: sending people to walk on the surface of the moon. Historical displays, videos, and posters—including a display honoring the four American astronauts of Slovenian descent—adorned the walls and lawn. Guests were also treated to the American blues rock band, the Jason Cale Band, which will be touring Slovenia from June 19-June 28, performing in Ljubljana, Trbovlje, Ravne na Koroškem, Maribor, and Tolmin.

Click here to view the full photo album from the Independence Day event!