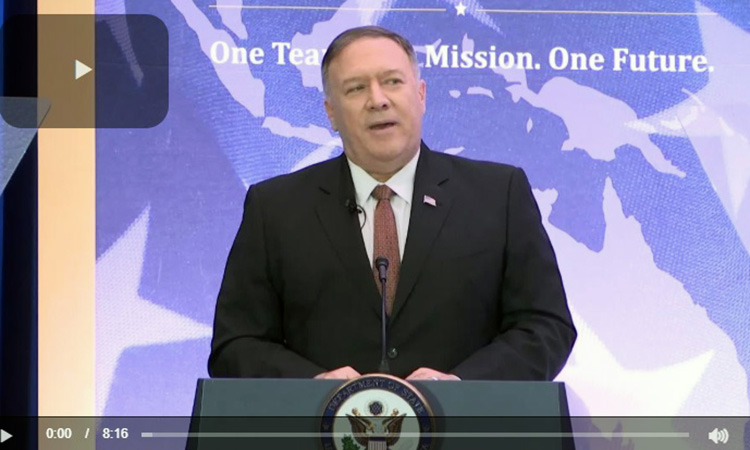 SECRETARY POMPEO:  Thank you all.  And good afternoon.  I hope everybody’s enjoying this birthday celebration.  That was a stirring video, and I want to thank all of the former Secretaries for participating in it.  Each of them was kind enough to share with me their advice.  I called them after I was nominated.  I called every single one of them.  And they all began with:  Listen more than you talk.  I hope I’ve done that.  I try to do it every day.  Show up in-person as much as you can, be everywhere, and don’t forget to sleep.  (Laughter.)  Working on the last one.

This is the second important birthday that I’ve had the chance to celebrate this month.  The first one was America’s.  This past 4th of July, Susan and I were here at the State Department, with members of our team, watching the fireworks light up the sky, and ambassadors from all across the world.  It was a beautiful sight, and it had a greater significance too.

On July 4th, 1776, our Founders laid down the proposition that all men are created equal.  They said we all possess certain unalienable rights.

And four score and seven years later – 87, for those who aren’t up on 19th century math – (laughter) – Abraham Lincoln reaffirmed those ideals in the Gettysburg Address.  He told the world that the United States was engaged in a Civil War to protect those very rights.

Now, here we sit 155 after that.  We at the State Department follow in the footsteps of our forefathers.  We use diplomacy to defend that very set of unalienable rights – not just for Americans, but for people all across the world:

We negotiate agreements with friends and foes alike to avert military conflict, and thereby prevent innocent civilians from dying.  We should take this mission seriously every moment.

We assist nations eager to preserve their independence from foreign influence.

And we are blessed in that we stand grounded in the unique moral authority of American values, in defense of the voiceless, when we see human rights abuses.

In 1814, a man named Stephen Pleasonton was a clerk at the State Department.  When the British invaded Washington, he was there.  At that time, the State Department was the keeper of all of the nation’s documents, so Mr. Pleasanton took it upon himself to smuggle the Declaration, the Constitution, the Bill of Rights, and all of our nation’s treaties to safety outside of the city of Washington, D.C.  Pretty remarkable.

Think too of men who have not been recorded so much in history, a man named George Waller.  He was our charge d’affaires in Luxembourg at the outbreak of World War II.  And when the Germans invaded Luxembourg, Mr. Waller refused to evacuate.  Many Jews were still seeking visas to the United States, and he wanted to help them.  The problem was, his post was not a visa-issuing consulate.  You know, the bureaucracy was in his way.  (Laughter.)  So Mr. Waller drove five hours to Antwerp in the dark of night to retrieve visa forms and a stamping machine.  It sounds old school, but he made it back to Luxembourg and proceeded to issue life-saving visas to hundreds of Jews.

We all know this as we sit here today:  Our family members are the hidden heroes of diplomacy.  Take family member Kitty Herrick.  She was the wife of our Ambassador to France at the outbreak of World War I.  She helped launch the American Ambulance Hospital in Paris.  Parisians called her “The American Angel.”

I wanted to tell those three stories today for a reason.  These folks show what the State Department – and the mission of American diplomacy ‒ is truly all about.  These diplomatic heroes laid a foundation for each of us – not just by protecting freedom through their good works, but by being a true example of service.

Now the conn is ours.  It’s our turn to pave the way for those who will come after us.  And we’re doing this too by defining what it means to be a member of the Department of State.  As you can see from behind me, we must be One Team, on One Mission, dedicated towards One Future.

This was the vision behind the department-wide effort to create the Professional Ethos, which we rolled out this past April.  The Ethos simply lays out commitments that unite every single person who is working on behalf of the State Department.  This should happen across administrations and generations and, indeed, jobs and roles.  It includes, of course, a commitment to our Constitution, to protecting the American people, to serving with professionalism and integrity, and to taking responsibility for each and every action that each of us takes.

You heard a little bit earlier today from Counselor Brechbuhl on how and why the Ethos was developed.  It’s a critical part of reinvesting in the Department and will serve us for decades to come.

There are two immediate ways that the Ethos will impact each one of us.  First, it will be the new training course and the “One Team Award.”  Regarding the “One Team” course, supervisors, let me be clear:  Tremendous effort has gone into creating this course and I expect all new hires to attend.  That’s all, every one of them.  Existing team members will be engaged in the coming weeks and months by their leadership team in the Ethos discussions and workshops.

And regarding the “One Team Award,” Carol Perez mentioned this – we’ll start soliciting nominations for it immediately.  Please give your full attention to ensure that the people who best exemplify what it is we’re trying to do, what our Ethos shall be, are recognized in this process.

Let me close with the last piece of the puzzle, which is “One Future.”

Every morning when I get to work, I walk through a hallway lined with paintings of my predecessors.  My son jokes that mine will look out of place after Madison and Jefferson and Monroe.  It’s nothing like our family members to keep us humble.  (Laughter.)  Some of the pictures are of the people we just saw in that video, and it is a vivid reminder that the State Department’s story began long before we got here.  And it will extend long after we are gone.  Our future diplomats will look back on us like we look back on our forefathers.  They’ll consider our deeds and tell our stories.  And I hope for their sake they don’t have to look at a painting of me every day.

Let’s set a shining example for them.  Let’s protect the American principles that have made our nation the greatest in the history of the world.

And let’s do that as One Team, One Mission, and One Future.  Thank you.  (Applause.)

I now have the – I get the incredible honor to introduce our next presentation – a conversation with the Dean of America’s Secretaries of State:  Dr. Henry Kissinger, led by his official biographer, Dr. Niall Ferguson.

The influence of Secretary Kissinger’s tenure can still be felt in places like China and Russia and to – in the Middle East.  And even today he continues to influence current events effectively.  At 96 years old, he’s a globetrotter and an active advisor to so many – including me.  Thank you, sir.

And Dr. Kissinger found a worthy biographer as well in Dr. Niall Ferguson.  A brilliant historian, Dr. Ferguson has taught at Oxford and Harvard and NYU.  He’s currently a senior fellow at the Hoover Institution.

We’re grateful for each of you being with us today.  Please, join me in welcoming Dr. Kissinger and Dr. Ferguson to the stage.  (Applause.)