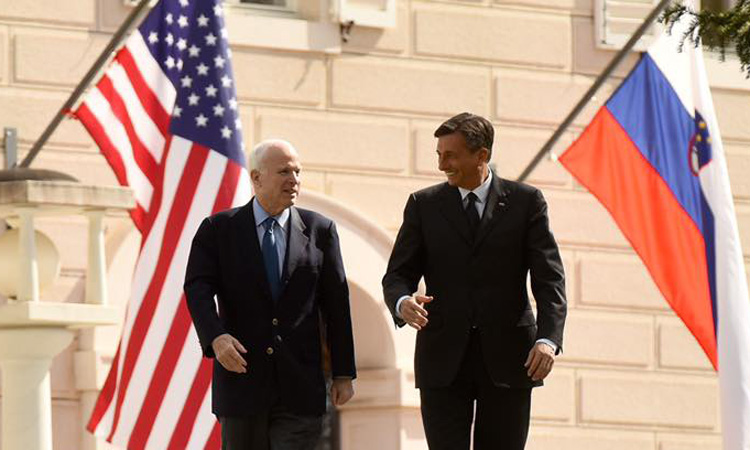 Mister President, Madame Minister, Mister Mayor, Generals, dear friends: it is a great honor to be invited to join you here in Andraž to remember the service and sacrifice of ten brave Americans, and to celebrate the enduring bond of friendship between the United States and Slovenia that is their legacy.

They were the crew of “Dark Eyes,” an American B-17 bomber that flew 80 missions during the Second World War in the skies above occupied France, fascist Italy, and Nazi Germany. By now, the story of “Dark Eyes” and her crew is familiar to many of you. On March 19, 1944—on her way to attack a Nazi supply plant in Austria—“Dark Eyes” was shot down by German fighters, and crashed here among these beautiful hills. Eight of the crew lost their lives that day. Two others spent the remainder of the war in a prisoner-of-war camp.

Many of you also know that “Dark Eyes” was not the only American aircraft shot down over Slovenia. There was also “Je Reviens”, another B-17 whose crew parachuted into Slovenia and were fortunate to be discovered by a friendly Partisan. The American crew followed their new Slovenian comrade,who led them on a five-day journey through enemy territory to safety.

It is that spirit of Slovenian generosity that brings us here, to this memorial erected by the citizens of this town. I am sure that the families of the “Dark Eyes” crew take great comfort in knowing that the memory of their loved ones lives on in this place. And for the honor and respect shown to these brave heroes, I know the people of this town and the people of this country have the heartfelt thanks of all Americans.

Yes, the friendship between the United States and Slovenia was forged in the crucible of world war. It was strengthened further in the Cold War through U.S. support to the former Yugoslavia as it defended itself in the darkest days of the Stalin era. And in the last quarter century, our friendship was solidified as Slovenia achieved its independence, joined NATO and the European Union, and participated in joint military missions in Kosovo, Afghanistan, and now in Iraq in the fight against ISIS.

Our friendship grows stronger today as the United States and Slovenia stand together as NATO allies to defend against threats to a Europe whole, free, and at peace—aggressive nations that seek to redraw the borders of Europe through violence, and terrorists who seek to destroy our common civilization.

Before coming here to Andraž, I had the honor of meeting with members of the Slovenian Armed Forces who will soon deploy to Latvia as part of NATO’s Enhanced Forward Presence. It was a powerful demonstration of Slovenia’s commitment to the NATO alliance and to the defense of our common security and shared values. And it was a reminder that the fight that belonged to the crew of “Dark Eyes” continues to this day.

Yesterday was the 25th anniversary of the United States’ diplomatic recognition of Slovenia. As we mark this occasion, we honor our past and embrace our future. We celebrate the close friendship between our two countries and look forward to the opportunities ahead to deepen our alliance. And here in this place, we honor the ten men who crewed “Dark Eyes,” and we rededicate ourselves to their cause and to the defense of freedom.

Thank you for allowing me to be with you today to honor their memory.