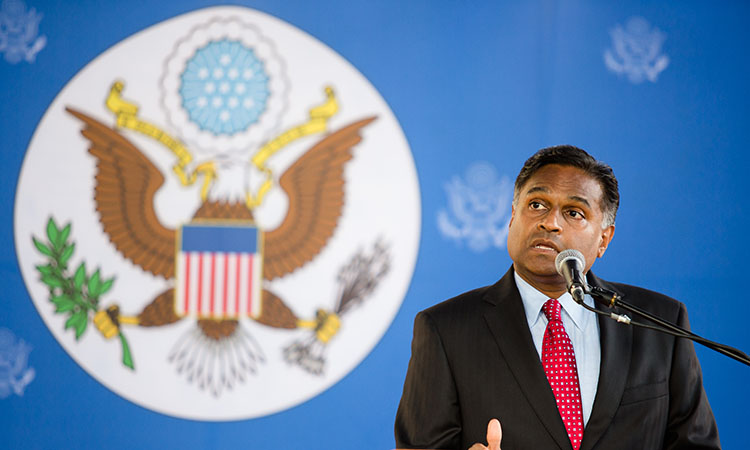 As you look around today, or even just at the invitation you presented when you arrived, it is clear that during this year’s Independence Day event, we’re honored—both as Americans and as citizens of the world—to celebrate the historic Apollo 11 moon landing that occurred nearly fifty years ago.

I was born a few months before the moon landing in a small city not far from the Arabian Sea. It was only after my family immigrated to the United States, and after I had already internalized the great promise and opportunities of life as an American, that I truly appreciated the significance of this event.

For eons, mankind had stared at the heavens above, convinced that they were unreachable.  That the very laws of nature prevented us from reaching higher and farther. That these laws were immutable and incontrovertible, and that space travel and setting foot on another extraterrestrial body were impossible.  Goethe wrote in his masterpiece Faust, “If you dream it, begin it. Boldness has genius, power and magic in it.” And we were bold. Within the space of a decade, we proved that the only barrier to reaching those goals that seemed impossible was the capacity of our own imagination.

As an immigrant child growing up in America, I was raised on the belief in the power of the American dream. The Great Gatsby that most quintessentially American of all novels, teaches us that America is a nation always looking to the future, a better place. And it was these stories – of Gatsby, that one could become anything in America, of the Apollo astronauts who dreamed to walk on the moon —it was these
stories that inspired me, not to become a scientist or even the doctor that my mother dreamed I would become.

No, these stories, America’s story, ultimately helped inspire me to become a diplomat—because it was a narrative of a nation always looking to make the world, and the future, a better place.  When the Apollo 11 astronauts left the surface of the moon in July of 1969, they left a piece of the lunar lander on the moon. Attached to that lander was a plaque that read, in part, “We came in peace, for all mankind.”

Today, as we celebrate the 243 rd birthday of the United States of America, we choose to honor this sentiment of peace and understanding, and the spirit of Apollo 11. We choose to honor the curiosity, the
dedication, and the view to a brighter future that this endeavor represents.

And we’re proud to do so among our friends in Slovenia. Because with Slovenia, we are united by more than politics and policies. We’re united in our love of knowledge, innovation, tenacity, and of pushing the boundaries of what is, to find out what can be. Slovenians share the same curious, adventurous spirit that brought Americans to space. Indeed, they are important contributors to our continuing exploration of the universe around us.

From Herman Potočnik Noordung who dreamed of people living in space before most of the world had moved away from horse-drawn carriages. To the four Slovene-American astronauts who have contributed to our space program in immense ways, and of whom both of our nations are exceedingly proud. The United States and Slovenia have always shared a close, abiding relationship because together, we value most those things that make our nations stronger.

Together, we share a dedication to enhancing our countries’ relationships through people-to-people ties. We know the importance of education to driving our advances in technology, writing our laws, and preparing our children for successful lives. And we know that no professional or academic works in a vacuum. Advances are built on the personal relationships that empower their creators.

That’s why we’re excited to continue our successful exchange partnerships in education and professional development. We broke records this year—and likely will again next year—for the number of Slovenians we enabled to travel to the U.S. to share experiences with their professional and academic counterparts. Slovenians worked with all manner of American experts: from rocket scientists in Alabama, to biologists in Slovenia.

Record numbers of Americans studied in Slovenia last year, and we will continue to build on that success. And we will continue our many uniquely American cultural offerings in the months to come with performances across the country.

Because all of these programs together paint a picture of who we are as Americans, helping Slovenians understand how very much we have in common.

Together, we know the value of perseverance and innovation as we build and launch businesses, and support our thriving economies. That’s why we are so proud of our work in supporting trade between our
nations, with the United States making up the third greatest source of foreign direct and indirect investment in Slovenia—1.8 billion dollars’ worth of proof that we’re committed to a mutually beneficial trade relationship.

And we want to see more Slovenian products on American shelves. Exports have been the engine of Slovenia’s robust economic growth in recent years and we want to welcome more of them to U.S. markets. From small startups developing innovative software and block chain technology, to well-established businesses producing hydraulic presses and energy efficient windows, our bilateral business ties are broad and far-reaching.

This is why we will continue to encourage Slovenian companies to participate in our annual SelectUSA Investment Summit, which just took place last week in Washington.  We’re also proud of the multiple occasions this year where our leaders have discussed the strength of our economic ties, and the strength of our relationship, at the highest levels in Washington, and in Slovenia.

And we’ve committed, together, to support the Three Seas Initiative to ensure that Europe has greater freedom of choice as it looks to diversify its energy sources and expand the connectivity of its infrastructure.
We thank Slovenia for taking a leadership role in the region by hosting this year’s Summit.

Together, we recognize that a secure future is not a given, it is earned. This is why we’re proud of our security partnership with Slovenia, and are privileged to work closely with the dedicated members of the
Slovenian Armed Forces. I have said many times before, and it bears repeating: Our defense partnership with Slovenia is one of the strongest, most enduring aspects of our bilateral relationship. Even if many Slovenians don’t always get to see the work our militaries do together, know that this remains as true today as it always has been.

Slovenia is an important and steadfast ally, and we continue to welcome and appreciate its participation in NATO, EU, and UN operations around the world. We also continue to encourage Slovenia’s efforts to
meet the commitment it made in Wales.

This is not an American request; this is a commitment voluntarily made with the awareness that Slovenia can and must continue to be a stabilizing force in the region, in Europe, and across the world.
In vowing to land astronauts on the moon, President Kennedy immortalized the phrase “we do these things not because they are easy, but because they are hard.”
It’s an inspiring call to action, but one that was driven by necessity.

President Kennedy struggled to make his case to the American public to land men on the moon. Many Americans, looking at their own safe, prosperous lives, couldn’t see the immediate need for such an ambitious and forward-looking goal. But we need not look to history to teach us that it is not always easy to find support for those things that are necessary. It requires us to remember President Kennedy’s challenge and to maintain a vision of a safe, prosperous future in remembrance of the dangers of the past.

President Kennedy’s call to action was a challenge to the American people to take on those things that are difficult because they are worthy of combined resolve. And this is the call to action I leave Slovenia with today. I know we share these aspirations for Slovenia to continue its leadership in the region, in Europe, and elsewhere. And this is why I am confident that we will continue to move forward, together, into a safer future.

This is my last Independence Day celebration in Ljubljana. My family and I are disappointed that we must leave, but I’m inspired by what I’ve seen during my time here and the team I’ve had the opportunity to work
with.

The U.S. Embassy team here in Ljubljana is the best Embassy team in the world, and it’s been my great privilege to work with them. I want to thank all of our staff members for their hard work and dedication, and I want to particularly thank everyone who worked so hard to make tonight’s event successful.

Over these last three years in Slovenia, I’ve seen a people who are driven to achieve. I’ve met countless students and young professionals who inspire me. And I’ve enjoyed living in, and working with, a nation
that knows its value to the region and the world, and seeks to lead toward a better tomorrow.  I also have to note that you also have some of the best gelato shops I’ve
ever been to in my life.

This anniversary of the moon landing, and its theme, couldn’t have been more appropriate for me as I depart Slovenia. Because today we recognize that although Apollo 11 is part of our collective history, it’s
more than just a single story of a man walking on the moon.

The Apollo missions captured the world’s attention and demonstrated the power of America’s vision and technology to inspire humankind to great achievements, exploration and scientific discovery—advances that were truly “for all mankind.”

It’s that same commitment to the achievements of tomorrow that bind us together so closely to Slovenians. It’s that same sense of curiosity, motivated by a desire for a better future that inform our friendship and our cooperation.  And it’s that same sense of responsibility to each other, and the world at large, that will keep our relationship strong far into our brighter future.

We don’t always have to reach for the stars. But together, I know we can always work “for all mankind.”

TOAST:
Could I ask everyone to raise your glasses? If you know these words from Prešeren, please join in me reciting them.

You can find a translation of the speech to Slovenian here.