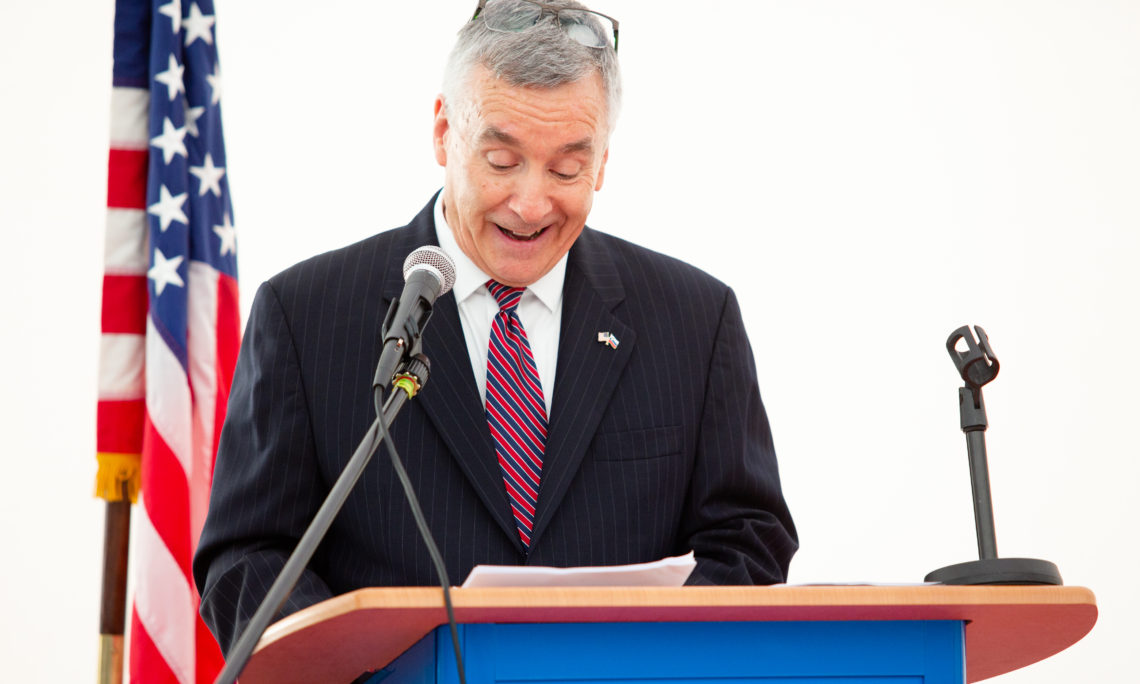 President of the National Council Kovšca, Minister Židan, colleagues of the diplomatic corps, dragi gostje, dragi prijatelji, dober večer in dobrodošli.  Welcome to this celebration of the 242nd anniversary of the founding of the United States of America.

I want to extend a special welcome to Major General Michael Loh, Commander of the Colorado National Guard, and members of his staff.  Thank you for being here with us tonight to celebrate our nation’s anniversary as well as the 25th anniversary of the very special partnership between the Colorado National Guard and the Slovenian Armed Forces.  Cooperation between the United States and Slovenia is strong in every sector, but it is particularly strong on security and defense issues, thanks in large measure to the work of you and your predecessors from Colorado.

I have had the incredible honor and pleasure of representing the United States in Slovenia for three and a half years.  As many of you know, my time here is soon coming to an end.  I will depart in just over two weeks, to return to Washington, to living with my dear wife Liz, and to one more State Department assignment.

In reflecting on my time here, I have been thinking about how all those who have come to visit — family, friends, colleagues – seem to comment, sooner or later, on Slovenia’s tourism slogan:  “I Feel Slovenia. ”  And how it is hard not to fall in love with the only country that has “love” in its name.  So, with apologies for downplaying the formality of the evening, I would like to talk a little bit tonight about how “I Feel Slovenia.”

Počutim se kot doma.  I feel so much at home.  I tell people that Slovenia is a lot like my boyhood home of Oregon – inspiring mountains, forests, rivers and lakes, and even a similar climate.  Being here has felt very much like I’ve come full circle in life, that I’ve come home again.

Feeling at home is not just about the places, it is particularly about the people.  So I thank the many Slovenian friends and colleagues here tonight, and many who could not come:

— — (For your warm hospitality to me and my family); hvala za prisrčen sprejem mene in moje družine;

You have truly made Slovenia my second home.

Sem optimističen.  I feel optimistic.  I will leave Slovenia deeply optimistic about the state of relations between our two countries.  This may seem counter-intuitive in a world where everything seems to be in flux.  And I do not underestimate the challenges in our Trans-Atlantic relations, but we have faced tensions before.  I have seen a lot during my 37-year diplomatic career, working for six different presidents.  We are in it for the long game.  And in the long game, we are in it for shared security and shared prosperity.

We’ve made progress on some tough issues, including on defense spending, counter-terrorism cooperation, and other security issues.  We are growing our trade and economic partnership.  It is not well known but, according to the Bank of Slovenia, when you factor in both direct and indirect investment, the United States is currently the second largest foreign investor in Slovenia, just behind Germany.  Ties in science, innovation, technology, and entrepreneurship are growing exponentially, as Slovenians find customers and capital, investors and investments, and inspiration in the United States.  And I am particularly proud that we were able to help Triglav National Park and Crater Lake National Park (in Oregon) reach a partnership agreement.  We will continue to encourage these people-to-people ties.  Bolj ko se poznamo in razumemo drug drugega, več dobrega lahko naredimo skupaj  (The more we know each other and the more we understand each other, the more good we can all do together).

So, call me crazy, or just afflicted with American-style optimism, but I think a bright future lies ahead for Slovenia and the United States.

Sem prijetno utrujen.  I feel pleasantly tired.  I’ve tried to make the most of my time here.  I try to work hard on policy, and security, and economic issues during the week, and have tried to visit every corner of your lovely country.

Ampak čez vikende sem (But on my weekends I am):

I’ve seen a lot of this country, and I have the transverzala passport to prove it.  Seventy-seven out of 80 stamps!  Dvakrat na Triglavu!  In nisem še končal.  All that tough work,  however, leaves a guy pretty tired on Monday mornings.  But I will depart confident that I’ve lived my Slovenian life to its fullest.

— Hvala vam vsem, ki ste danes tukaj (Thankful for all of you who are here with us tonight).

— Thanks to the team that put together this lovely evening and so many other events during my time here.

— Thanks to my wife and children for allowing me to live so far away to represent the United States to a NATO Ally.

— Thanks to my dedicated Embassy staff – Americans and Slovenians alike – for your professionalism and hard work in advancing U.S.-Slovenian relations.

— Thanks to partners, colleagues, and friends, who share a vision of a more democratic, more just, more prosperous, more secure world for the next generation.  Or as envisioned in our Declaration of Independence, to protect and advance equality and “certain unalienable rights” including “Life, Liberty and the Pursuit of Happiness. ”

— Thanks for Slovenia’s dedication to look beyond its borders to make this region and the world a better place.

— Thanks to Slovenia for being a strong ally to my country.

With that, I raise my glass to toast the enduring friendship between the United States of America in Republiko Slovenijo.  Naj bo vez med našima deželama vse močnejša (May the bonds between our two countries grow ever stronger).