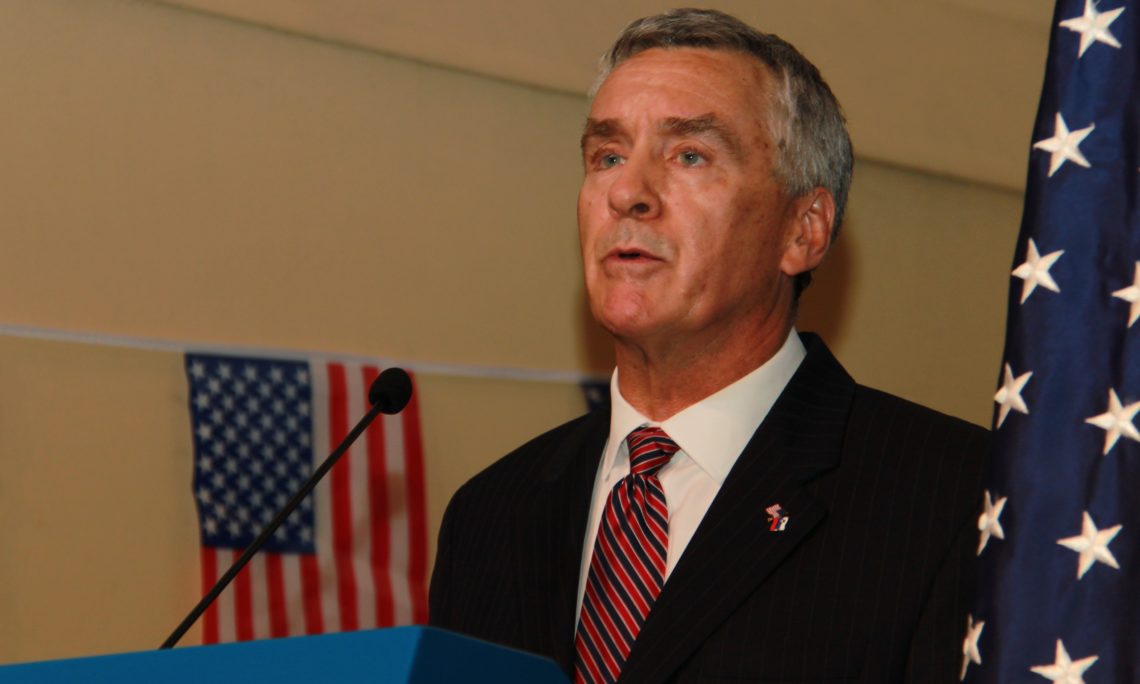 Ministers, ladies and gentlemen, good evening, and welcome to this celebration tonight of the 241st anniversary of the founding of the United States of America.

The drafters of our Declaration of Independence wrote of self-evident truths:  “that all men are created equal,” and that they are endowed “with certain unalienable Rights” including “Life, Liberty and the pursuit of Happiness.”   These principles are enshrined in our Constitution, which begins with the resounding cry that it is “We the People of the United States” who ordain and establish our government in the spirit of creating “a more perfect union.”

These are the foundational principles of the American Republic, the world’s oldest democracy.

Over these past twenty-five years, we have developed a remarkable partnership and friendship with Slovenia, one of the world’s younger democracies.

We congratulate Slovenia on all it has accomplished in a mere quarter of a century.  It has developed a vigorous democracy, joined NATO and the European Union, and advanced the prosperity and welfare of its citizens.

The video you saw recalled some of the highlights of our 25-year relationship.  Over these last twenty-five years we have developed an enduring alliance based on shared values, shared prosperity, and shared security.

We must thank those who fought, 241 years ago in the U.S., and 26 years ago in Slovenia, to give our nations a chance to shape our own destinies.

We also honor and thank the Slovenian troops that serve side by side with U.S. counterparts in Afghanistan, Iraq, Kosovo and most recently in Latvia.

The Slovenia-U.S. relationship goes back much longer than 25 years.  It began with the thousands of Slovenians who emigrated and built a new life in the United States over one hundred years ago.  It includes the partnership between American airmen and the partizans during World War II.  And it includes the Yugoslav-era participants in our exchange programs, some of whom went on to take leading roles in Slovenia’s transition to independence.

Our relations find their true strength in the people-to-people relationships that happen each and every day.  These include the retired American physics teachers who return every year to participate in Ljubljana’s festival of science; to Slovene-American businesspeople from Colorado, Ohio, and elsewhere building trade links; to the brilliant young Slovenian serving as the chief scientist of one of Silicon Valley’s hottest companies.  These are the people who tie our countries together.

Many of these people-to-people links happen on their own, but I am happy to say that my team at the Embassy is responsible for at least a few.  Just last month we brought back General Frank Gorenc, a Ljubljana boy who rose to become an American four-star general and the Commander of U.S. Air Forces in Europe; he joined Prime Minister Cerar to open a spectacular exhibition at the Pivka Park of Military History, remembering the American airmen shot down over Slovenian territory during World War II and the resistance fighters committed to saving them.  We’ve welcomed Kansas City barbeque masters for a cooking demonstration on Ribji trg.  We’ve worked with SLOGA Platform to exchange best practices between American and Slovenian NGOs on refugee integration.  We’ve connected American experts with two dozen women entrepreneurs here participating in an innovative, entrepreneurship academy, run by CEED Slovenia.  We have encouraged U.S. and Slovenian business people to invest in both countries.  And my list could go on and on.

Perhaps what I’m most proud of this year is the signing of a cooperation agreement between Triglav National Park and Crater Lake National Park.  This is personal for me.  I was born in southern Oregon near Crater Lake and visiting Crater Lake was a part of my childhood. Its awe-inspiring beauty reinforced my love of the outdoors.

Now, as U.S. Ambassador to Slovenia, I have had the immense pleasure to enjoy Slovenia’s natural treasures—climbing Triglav (twice), walking the Transverzala, skiing, and so much more.

There is a great deal to be learned on both sides, bringing these two parks together to share expertise on conservation, administration, education and research; we look forward to a long, productive relationship.

In short, we do well to take a step back and appreciate that it is our people and our democratic principles that bring our countries together.  Perspectives may change with changes in governments or difficult issues, but our shared values and relationships endure.

I will close by offering a few thank yous.

– Thanks to the donors who have given so generously to help make this evening possible.

– Thanks to Big Band Grosuplje for the wonderful music.

– Thanks to my Embassy team for once again pulling off a delightful party.

And, of course, thank you to you all, dear guests, dear colleagues, dear friends.  Thank you for your matchless hospitality and personal kindness both in the city and on the trails.

It is the honor of my life to represent the United States in your country.  Even after assignments Cairo, Rome, Brussels, Kabul, and Washington, Slovenia is special.  More than shared interests or even Slovenia’s natural beauties, it has been the people I have met, and their warm hospitality, who have elevated my time here.

With that, I propose a toast to the enduring friendship of the United States of America and the Republic of Slovenia.  Na zdravje!