A Short History of the Ambassador’s Residence

The Residence of the United States Ambassador to Ljubljana was built in 1926, and was acquired by the U.S. Government in early 1998 from Dr. Robert Blinc and Dr. Marta Blinc.  The building is located in Rožna dolina, one of Ljubljana’s most beautiful neighborhoods, across from the rolling hills of Tivoli Park.  Designed by an Austrian architect, the building is an example of Austrian vernacular architecture of the era. This is evidenced by the steep roof, playful and ornamented gables, painted stucco with ornamental window surrounds, and symmetry. 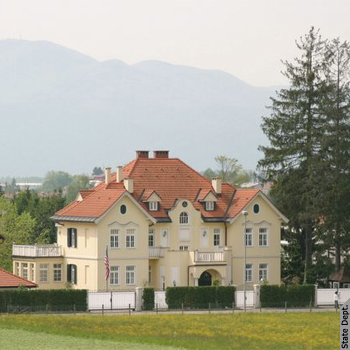 The building was originally constructed as a staff apartment building with four apartments on the Kollman estate.  The estate, called Vila Podrožnik, was nationalized after World War II and was used first by the Yugoslav government, and now by the Slovene government, for official guests.  The Residence, now on its own lot of approximately 1,980 square meters, was sub-divided from the Kollman property and has about 792 gross square meters of usable space on four levels.  The principal feature of the existing landscape is a grove of mature pine trees about one hundred feet high.  In addition, the original gazebo was restored to its original appearance.  In 1999, Department of State architect Ron Tomasso collaborated with Dr. Sergej Pavlin, architect, and PUV Celje, contractor, to restore the building, and convert it to diplomatic use.  The building was completed in July 2000.