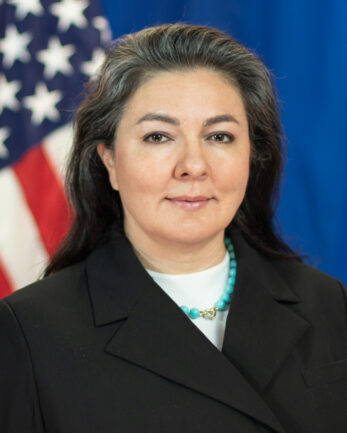 Melania Arreaga assumed her role as Deputy Chief of Mission in July 2022.  She recently served as Senior Advisor to Under Secretary for Political Affairs Victoria Nuland. Her previous overseas tours include in India, UAE, Estonia, and her domestic tours include the Operations Center.  Before becoming a diplomat, Melania was a Chicago prosecutor and deputy chief counsel for an Illinois regulatory agency. Melania speaks Spanish and French and studied Arabic at Foreign Service Institute.

Melania holds a J.D. from Loyola University Chicago School of Law and a B.A from George Mason University.  She hails from Chicago and is married with two children.

Slovenia is a great friend and partner to the U.S., as well as a reliable #NATO Ally. With the new 🇺🇸 administration & a new head of our Embassy in Ljubljana, we continue efforts to foster even stronger bonds between our countries. Meet CDA Susan Falatko👉 https://t.co/3TnNftfUGC pic.twitter.com/eMsNmH6vuw