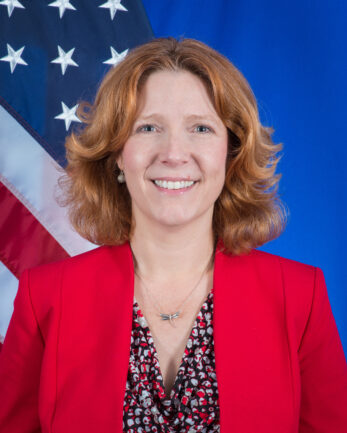 Susan Falatko joined the U.S. Embassy in Ljubljana as Chargé d’Affaires in June 2019. She served as the Director of the Office of South Central European Affairs at the U.S. Department of State from 2017 to 2019, focusing on the Western Balkans. Prior to that, she was Deputy Chief of Mission at the U.S. Embassy to Mauritius and Seychelles from 2013 to 2016.

Ms. Falatko has also been posted to Kigali, Rwanda, as the Public Affairs Officer and to the U.S. Mission to the United Nations in Geneva as the U.S. liaison to the UN Specialized Agencies.

Originally from Chicago, Illinois, Ms. Falatko received a B.S. in Psychology from the University of Iowa (1990), an M.A. in International Relations from the George Washington University (1997), and a Master’s Degree in National Resource Strategy from the Eisenhower School at the National Defense University (2017). Prior to joining the Foreign Service, she taught English in Tokyo, Bangkok, Prague, and Washington, DC. She is proficient in French and Spanish.

Slovenia is a great friend and partner to the U.S., as well as a reliable #NATO Ally. With the new 🇺🇸 administration & a new head of our Embassy in Ljubljana, we continue efforts to foster even stronger bonds between our countries. Meet CDA Susan Falatko👉 https://t.co/3TnNftfUGC pic.twitter.com/eMsNmH6vuw