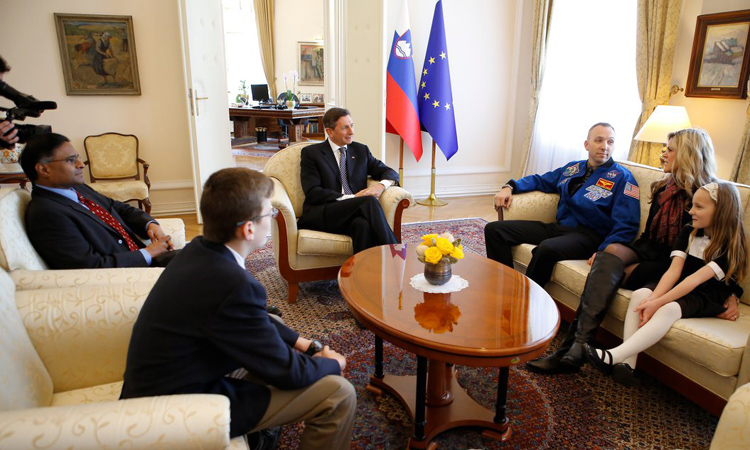 U.S. Embassy Ljubljana hosted NASA astronaut Randy “Komrade” Bresnik, who returned from ISS Expedition 52/53 in December 2017 after spending 139 days in space. He previously went to space in 2009. Mr. Bresnik traces his Slovenian ancestry to Ljubno and Luce in Logarska dolina, where his great-grandparents emigrated from when they came to the U.S. While in Slovenia, Mr. Bresnik met with Slovenian President Borut Pahor and Prime Minister Dr. Miro Cerar, and also visited the Herman Potočnik Noordung Space Center in Vitanje. In a homecoming of sorts, Mr. Bresnik was warmly welcomed by the Mayors and people of Ljubno and Luče, meeting with many relatives from the two towns. The program concluded in Ljubljana with a visit to a local high school and a public event at the National Gallery attended by 200 people. We are honored and grateful for the opportunity to Mr. Bresnik, who walked in space and now shares his unique and incredible experiences with all of us down on Earth.
(Photo Courtesy of Luka Dakskobler)