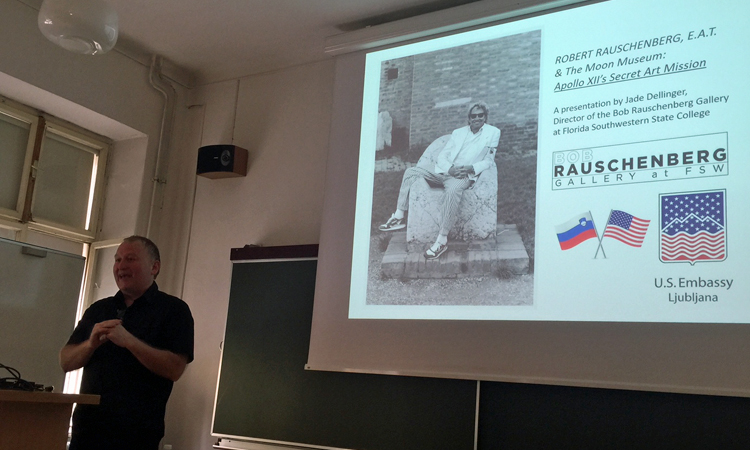 For nearly 20 years, Jade Dellinger, the Director of the Bob Rauschenberg Gallery at Florida Southwestern State College, has been curating groundbreaking art projects and exhibitions, among them the Moon Museum project. During his visit to Slovenia last week, Mr. Dellinger spoke about how the Moon Museum (which is, in reality, a microchip-sized compendium of several well-known artists work) was the first-ever “Space Art” project – a secret program that spirited the work of Rauschenberg, Warhol, Oldenburg and others to the lunar surface in 1969.  The tiny ceramic chip with drawings by these six artists was produced by Bell Laboratories as an “exhibition-in-my-Pocket” and was supposedly covertly attached to a leg of the Lunar Module Intrepid, and subsequently left on the Moon after the Apollo 12 mission. During his stay in Slovenia, Jade gave lectures at the Faculty of Social Sciences, Academy of Fine Arts and Design and at Herman Potocnik Noordung Center in Vitanje. Besides sharing interesting facts about the Moon Museum project (what it meant for artists to present their art in space, the story behind the actual engineer at NASA that made sure the ceramic was sent to space, and how many pieces of Moon Museum were actually created) Jade also brought an original “sister” copy of the chip that was allegedly taken to the moon. Through his engaging story-telling, he explained how the relationship between art and science remains as fascinating today as it ever was, and that this project is an excellent showcase of how artists have been engaged in the history of space travel.