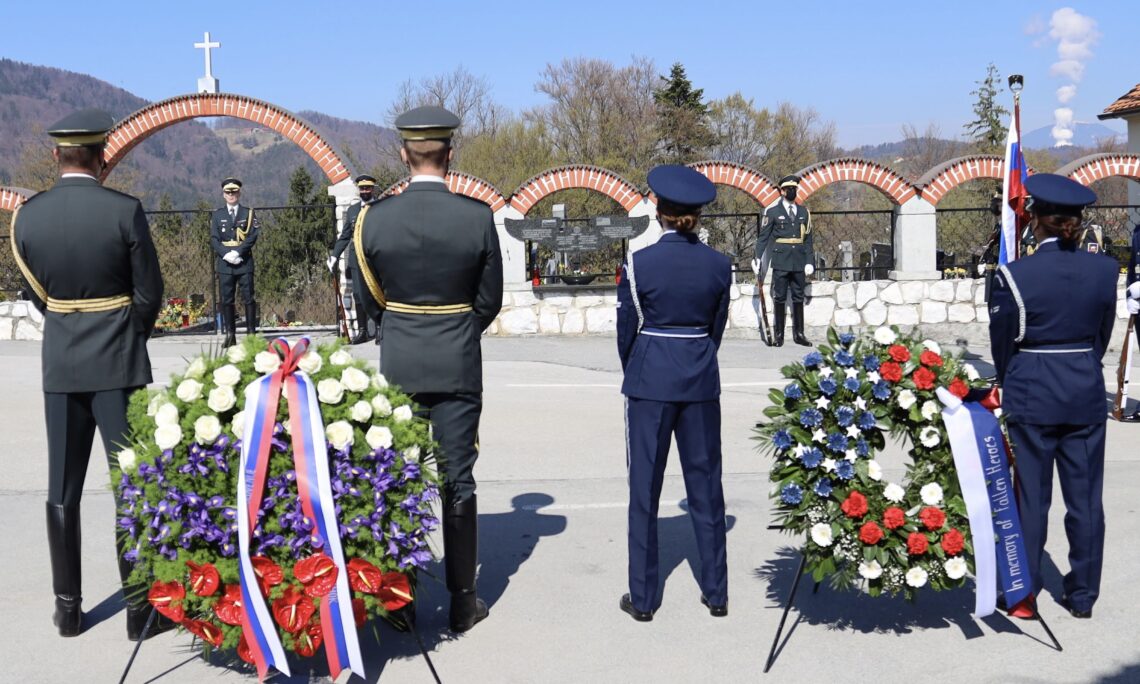 Today we gather, Slovenians and Americans, to honor the brave crew of the American B-17 bomber called “Dark Eyes” and to honor the compassionate people of Andraž nad Polzelo for honoring the dead, supporting the survivors, and keeping the memory of their sacrifice alive.

It was 78 years ago, on March 19, 1944, that 10 very brave United States airmen boarded their B-17 bomber, “Dark Eyes,” to target an enemy military production plant. In a violent battle, their plane was shot down over Andraž, eight crew members died, and two were taken as prisoners of war.

Today, I’d like to remember the names of those who lost their lives:

The two survivors who were taken prisoner were Second Lieutenant Louis Boehm and Staff Sergeant Kenneth Cook. With the help of the residents of this community they survived to return home to their families in America.

We are deeply grateful for the valor and sacrifice of these men and for our enduring friendship with you through the generations. Tomorrow marks the 30th anniversary of the establishment of diplomatic relations and a strong bond between Slovenia and the Unites States. It is fitting that on this anniversary we honor the special friendship and goodwill shared between the people of America and Andraž. Out of war and loss, our shared values for human dignity and freedom from tyranny have endured.

Today, we face another unjustified and brutal war. The atrocities we are witnessing by the Russian regime are a stark reminder of what the crew of “Dark Eyes” was fighting for – freedom, democracy, human dignity, and peace.

These values endured when they were threatened by tyranny eight decades ago, and they will endure as we stand together today against Putin’s war in Ukraine.

As President Biden said, “Liberty, democracy, human dignity – these are forces far more powerful than fear and oppression. They cannot be extinguished by tyrants like Putin and his armies. They cannot be erased from people’s hearts and hopes by any amount of violence and intimidation. They endure…. In a contest between democracy and autocracy, between sovereignty and subjugation, make no mistake – freedom will prevail.”

Let us honor these 10 men who crewed “Dark Eyes,” embrace our friendship of many generations, and work together in support of peace.

Thank you for the honor of inviting me to join you today.