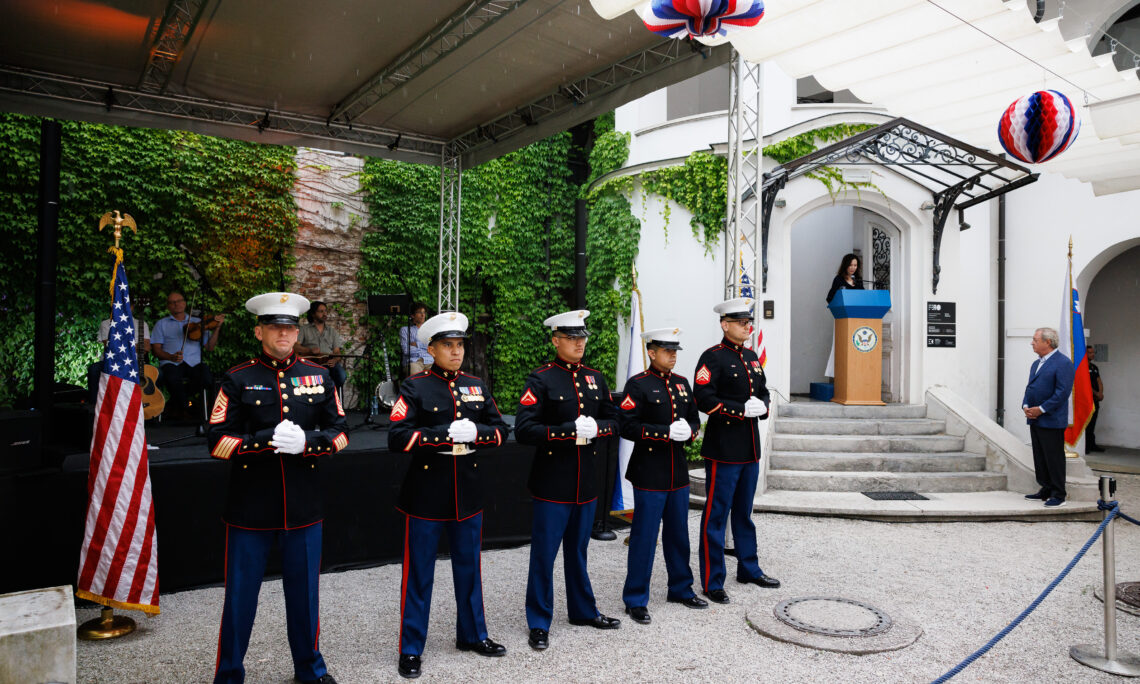 Good evening everyone.  Thank you for joining us tonight in our celebration of freedom and friendship.

The Fourth of July – the United States’ Independence Day – hot dogs, beer, watermelon, barbeque, picnics, parades, family reunions and fireworks.  But what exactly are we celebrating?

We are celebrating an experiment in liberty — in freedom.

We are celebrating a special document – a proclamation called the Declaration of Independence.

Its purpose? – to declare the intent of the 13 American colonies to break their bonds with Great Britain in favor of self-determination.

Thomas Jefferson, who later became Secretary of State, and the 3rd President of the United States, wrote the Declaration of Independence when he was just 33 years old.  Its most famous sentence still inspires today:

“We hold these truths to be self-evident, that all men are created equal, that they are endowed by their Creator with certain unalienable rights, that among these are life, liberty, and the pursuit of happiness.”

The Declaration of Independence has stood the test of 246 years.  It has served as inspiration for people around the world who seek freedom and democracy.

In 1991, Slovenia undertook a similar path to democracy setting an example to people throughout the world of what can be accomplished on the path to freedom.

The people of the United States and the people of Slovenia are kindred spirits in our quest for liberty and the rule of law.

As an aside, this pendant I’m wearing is an American coin known as the Liberty or Peace Coin.  My mother, who was born in 1917, acquired it as a young woman and later gave it to me.  It was minted to commemorate the end of WWI and the peace that followed.

On one side, it depicts our national symbol of the eagle holding an olive branch with the word “peace” and on the other side it depicts what we call “Lady Liberty.”

And so, especially this year, while Ukraine valiantly fights for freedom, life, and the happiness of its children, it is vital for us who understand what it means to fight for freedom and liberty to remember what President Biden recently said: “Freedom is not free.”  Freedom is a responsibility.  Freedom is a work in progress.  It depends on the hearts and minds of the people, and the commitment of our men and women in uniform.

So, to our armed forces present here tonight – I salute you.  And to the people of Ukraine – We stand with you.  Slava Ukraini!

I also would like to acknowledge the young 12-year-old Slovenian artist who created the cover of our invitation.  Her name is Zoja Peternel.  In honor of the 30th year of our cherished friendship with Slovenia, we invited children to participate in an art competition depicting what this friendship means to them.

The competition was tough – entries came in from across Slovenia, and you can view them in the exhibition lounge at the back right corner of the castle.

Zoja’s artwork won the competition.  It depicts a beautiful boat flying across the seas through choppy waters and sunny days.  Sometimes in the world of international relations we have stormy weather and sometimes we find ourselves with full sails and the wind at our back.  But no matter what the weather, we sail the seas of freedom together.

And now I would ask y’all to raise your glasses in a toast.  Let’s drink to our friendship and to many more years of sailing the seas of freedom together.  Na zdravje!

Before I conclude, I must thank our Embassy team for working so hard to make this event a success.  And to our donors, this party would not be half as much fun without your assistance.  Thank you all!

Now let’s have some fun, enjoy our friendship and some great bluegrass music!  A round of applause please for The Footprints.

Click here to see more photos from the event