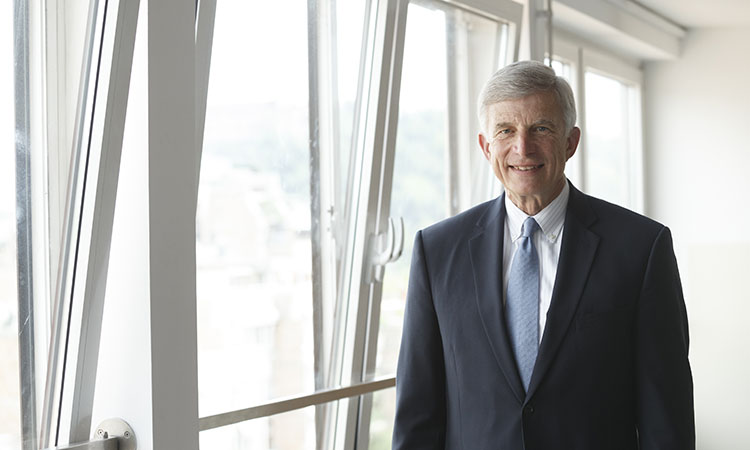 In the year when the world is celebrating the 50th anniversary of the Apollo 11 moon landing, we were fortunate to catch the American astronaut with Slovenian roots Ronald Sega (his grand-parents were born in Loški potok) who recently visited Slovenia. Dr. Sega was invited by the Engineering Academy of Slovenia, which presented him an honorable membership award.  During his stay, Dr. Sega also visited the Faculty of Mechanical Engineering in Ljubljana where he gave a lecture on the importance of space exploration and the further development of space programs. The biggest hall at the faculty was filled with students of engineering, professors, experts in engineering and space enthusiasts. All wanted to hear what Dr. Sega was able to share with them.

He is currently a professor of systems engineering and Vice President for Energy and the Environment at the Colorado State University Research Foundation but is known by all the outstanding achievements during his work as the astronaut at NASA since 1991. From November 1994 to March 1995, Sega was the NASA Director of Operations, Star City, Russia (The Gagarin Cosmonaut Training Center) responsible for managing NASA activities at Star City. These activities involved building an organization and infrastructure to support astronaut and cosmonaut mission and science training for flight on the Russian Space Station Mir. He also participated in training on Russian Space Systems and was the first American to train in the Russian EVA suit (Orlan) in their underwater facility (Hydrolaboratory). A veteran of two space flights (STS-60 in 1994 and STS-76 in 1996), Sega logged over 420 hours in space.

Responding to the question of what does one need to do to become an astronaut, he answered that you have to be hard-working and curious, with a lot of energy and persistence. And he believes he got a great dose of those qualities thanks to his Slovenian roots!