The building which presently houses the United States Embassy was first conceived in 1897 by Vienna architect Alfred Bayer. It was built by the Ljubljana construction firm of Viljem Treo for painter Heinrich Wettach, and served as his family’s villa in Ljubljana. Located in a portion of the city modeled on the architect Fabiani’s “Ljubljana Ringstrasse” project, the picturesque villa was part of wave of new construction in the city that followed the devastating earthquake of 1895.

The embassy is situated within a historic area, and is protected by a historical preservation decree of the Ljubljana municipality. In 1946, the building was altered to accommodate the Central Technical Library, with a number of interior modifications being made at the time. The last renovations to the Library took place in 1991, when the structure’s attic was renovated to make room for library offices. 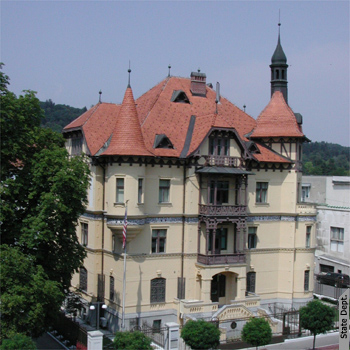 In the mid 1990’s, the building was acquired by the U.S. Government, and renovations began in 1998. On December 17, 1999 Marc Grossman, then Assistant Secretary of European Affairs, Officially opened the new Embassy.