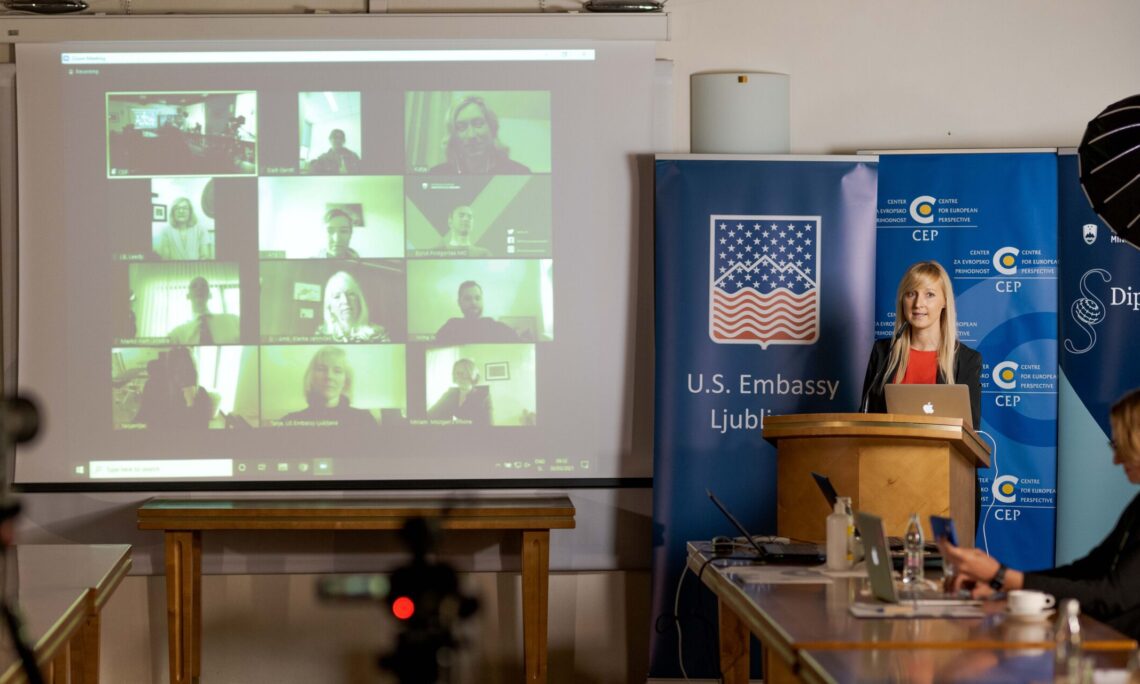 First and foremost, I’d like to thank our hosts at CEP for their ongoing dedication to our partnership on the European Digital Diplomacy Exchange initiative, and to the Diplomatic Academy for including me in this virtual program as we continue to seek to expand cooperation between the U.S. Embassy in Ljubljana and our fellow diplomats Slovenia.

We have our own diplomatic academy back in Northern Virginia – a campus with an often college-like feel that encourages American Foreign Service Officers to escape from their day-to-day tasks at the State Department in order to take a step back and view our work in the broader strategic context of U.S. foreign policy priorities. With the new U.S. administration nearing the end of its first hundred days in office, I want to talk just briefly about those priorities.

The Biden administration recently issued an Interim National Security Strategy, and it is full of objectives that are directly relevant to our strong bilateral relationship with Slovenia. It talks of promoting a favorable distribution of power to deter and prevent adversaries from directly threatening the United States and our allies, inhibiting access to the global commons, or dominating key regions. It directs us to lead and sustain a stable and open international system, underwritten by strong democratic alliances, partnerships, multilateral institutions, and rules. We’ve seen the administration’s commitment to pursuing these goals reflected in Secretary of State Blinken’s first official visits – to Tokyo, Seoul, and to Brussels for last week’s NATO ministerial alongside Foreign Minister Logar.

The strategy also calls on us to collectively address the very challenges you have been discussing here in this seminar for the past two days. We know anti-democratic forces use misinformation and disinformation to exploit perceived weaknesses and sow division within and among free nations, erode existing international rules, and promote alternative models of authoritarian governance. For years we were focused on the ability of digital media to destabilize dictatorships, but we’ve since learned that they are a powerful tool for disrupting democracies as well. We have experienced this first-hand both in the United States and across Europe in recent years, which is precisely why we partnered with the Center for European Perspective to create the European Digital Diplomacy Exchange – a platform for likeminded allies and partners to learn from each other how best to promote democratic principles via digital media while simultaneously working together to detect, deter, and defend against online aggression from hostile adversaries. We truly appreciate the leadership role Slovenia plays in enhancing digital diplomacy throughout the Western Balkans and Eastern Europe through this initiative.

We cannot effectively counter emerging threats in the information space without the help of highly capable allies like Slovenia, so I would like to thank you again for being here and say that we look forward to continuing to work closely with you in confronting among the most pressing challenges of our time.