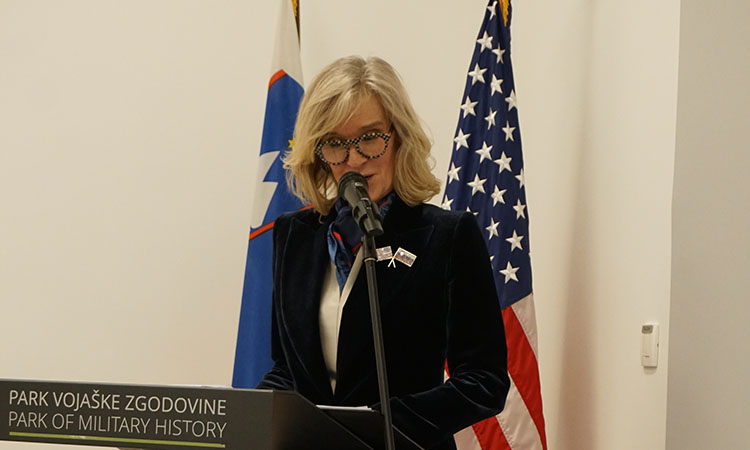 I’d like start by saying thank you to Association Kolut, Studio Proteus, and the makers of this film for capturing the story of such an important and compelling figure in modern history, and to our friends at the Park of Military History for their continued collaboration with the Embassy on projects like this.

Last week marked my three month anniversary as the U.S. Ambassador here in Slovenia, and one of the things that has really struck me in this short time is the extent of historic ties between the U.S. and Slovenia.  It’s been like peeling an onion as we say – each time I learn about a facet of our shared heritage, there are ten more layers just beneath it.  And I can’t wait to watch this film, because the life story of George Kraigher is a perfect example of this.

Kraigher’s journey from a small town not far from here to the upper echelons of America’s largest international airline touches on many chapters in our mutual history that continue to define our bilateral relationship today.  Not surprising perhaps, as he epitomizes the Slovenian ingenuity and work ethic that constantly amazes me.

That very ingenuity and work ethic which made George Kraigher such an aerospace innovator would eventually make the Boeing 747 (designed by Slovene-American Joe Sutter) the “Queen of the Skies” for a generation, and take four Slovenian-American NASA astronauts to space.

We continue to see that same ingenuity today in the University of Ljubljana team that beat out students from around the world to win the international Design, Build, Fly aerospace competition in Arizona this spring. That same fundamental belief embodied by George Kraigher that challenges can be overcome with knowledge and hard work.

Kraigher was a war hero even before he became a Texan and returned to the region he knew best with the U.S. Air Force in World War Two.  I’m sure his acts of uncommon valor, alongside those resisting the occupying forces, are well documented in the film we’re about to see, so suffice to say that we still honor their collective efforts every year in ceremonies like the one marking Slovenian-American Friendship Day in Andraž, and that the bonds they forged form the strong roots of our extensive military cooperation today.

Lucky for us, George Kraigher wasn’t alone.  And I want to take this opportunity to emphasize the profound effect that indomitable Slovene spirit has had on us as a nation.

Slovenian immigrants who came before Kraigher literally helped build America, working in the coal mines and steel mills of places like Bethlehem, Pennsylvania.  Musicians like Frankie Yankovic made Slovene culture a part of our own, while Slovene-American Olympians like speed skater Eric Heiden and gymnast Peter Vidmar brought home gold medals and redefined their sports.

Politicians with Slovene roots such as Paul Gosar and Amy Klobuchar continue to make legislation that guides our democracy today, and, of course, we’re fortunate that a positive Slovenian influence extends to the White House – encouraging us to always Be Best.

Highlighting these extensive, long-standing ties between our two countries is a priority for me during my time here as Ambassador, and so I’d like to thank you all again for helping us to do that here today.