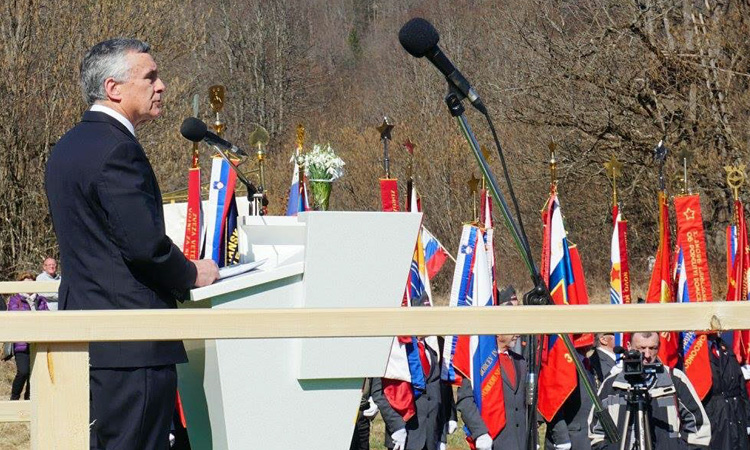 Madam Minister, Ambassador Kacin, Mr. Mayor, Generals, other distinguished guests, it is an honor and privilege to join you today in Žužemberk.  Hvala vam za povabilo.

Today we celebrate and remember the remarkable story of the B-17 “Je Reviens,” its crewmembers, and the partisans who saved those crewmembers’ lives by escorting them through enemy-held territory and on to safety.

Those who assisted these American strangers, strangers who literally fell from the sky, exhibited incredibly humanity and bravery, and cemented a bond that we still feel many decades later.

That was March 9, 1945.  Today the people of Slovenia and the United States are connected as friends, as partners, and as Allies.

As a student of history, it has been especially interesting to me to get out and about across Slovenia to hear the stories of the American WWII-era downed aircraft that fell over this beautiful land, from Zuzemberk to Andraz nad Pozelo to Golica, among other places.

To see these places in person.  To walk in the steps of those who were here before us.  And to try to understand the events that took place.

The memoir of Edward Logan, Jr., the pilot of the “Je Reviens,” about the very event we are commemorating today, is a thrilling read.  Logan describes how his aircraft took fire outside of Graz, how he guided the damaged plane down with great effort and great luck, how his crew bailed out one-by-one, and how the plane came down on Slovenian territory while he watched, hanging by his parachute in the branches of a nearby tree.  Lucky for Logan, shortly after he cut himself free and finished a cigarette, he encountered a friendly Slovenian partisan, Captain Milan Vujinovic.  Vujinovic led him on a five-day trip that would take him and entire his crew to safety.

It’s a truly remarkable story that seems more Hollywood fantasy than small town Dolenjska reality.  But it has the delightful benefit of being true, and for me it is a heartening reminder of the historical bond between our people.

My father and five uncles were World War II veterans.  Most served in the Pacific theater.  But Zuzemberk reminds me of my mother’s youngest brother, who was a tail-gunner on a U.S. bomber in Europe.  To the best of my knowledge, his aircraft did not fly over Slovenian territory, but I like to think that if he faced the same fate as the crew of the “Je Reviens,” he would have found the same comradeship, assistance and protection.

As we get further and further from that era, as many of the veterans of that war pass on, it is all the more important that we continue to remember our past, and learn the lessons it provides.

This ceremony is a reminder of our continuing commitment to freedom, human rights and peaceful resolution of disputes, to the vision of a Europe whole, free and at peace.  This is particularly important as we celebrate and reflect on 25 years of close relations since Slovenia’s independence in 1991.

The foundations of U.S.-Slovenian friendship and military cooperation were built here during the Second World War in Allied cooperation with, and support for, the resistance.  It was fortified through massive American military assistance – tanks, artillery, trucks, fighter aircraft – in the early 1950s to help Yugoslavia defend its borders and sovereignty during the Stalin era.

Our bonds were profoundly strengthened by Slovenia’s accession to NATO and the European Union, through two decades of partnership between Slovenia and the Colorado National Guard – including joint military missions in Afghanistan and Kosovo – and now in the global effort to defeat ISIS.  Our strong relationship is exemplified, most recently, through military exercises and training throughout NATO territory, reinforcing the credibility and effectiveness of our commitment to collective self-defense, in response to increasing threats to European security and stability.

And our partnership grows ever stronger.  Today, we stand united in the face of challenges from those who seek to redraw the borders of Europe through the use of force, from instability in the Middle East and North Africa, and against terrorists and extremists who would divide and warp the cohesion and culture of the United States, Europe, and other free and tolerant societies.  Together we can face any challenge if we sustain faith in our values and our commitment to unity of purpose.

When the crew of the “Je Reviens” bailed out of their plane over 70 years ago, and descended to snowy, foreign terrain, they were met with the ultimate in humanity and hospitality.  For that, on behalf of the United States, and on behalf of the crew, I thank you with all my heart.