Home Home | News & Events | All Eyes on Ukraine: Our Promise on Russian Accountability 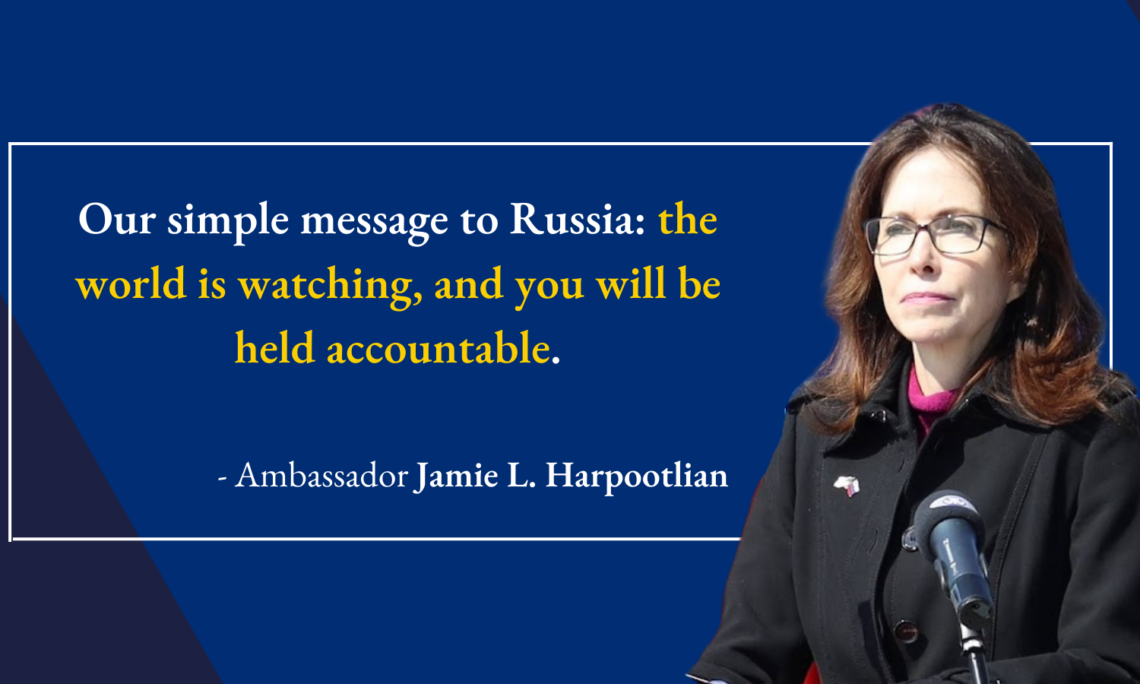 Op-Ed Vecer All Eyes on Ukraine- Our Promise on Russian AccountabilityOp-ed from U.S. Ambassador to Slovenia Jamie L. Harpootlian for daily Večer

Russian President Vladimir Putin’s unprovoked and unjust war on Ukraine has unleashed horrific violence and caused immense death and destruction. The world has witnessed the horrors of this war in the images from Ukrainian towns like Bucha, Irpin, and Hostomel, and in Ukrainian towns and cities still held or besieged by Russian forces. Russia’s indiscriminate attacks have injured and killed civilians and destroyed vast amounts of civilian infrastructure, including hospitals, schools, a theater where children were sheltering, and a busy railway station. The national, collective trauma for Ukrainians will never be erased. There are also credible reports of brutal, interpersonal violence including sexual violence against women and children, torture, and execution-style killings.

These horrifying events in Ukraine do not appear to be isolated incidents or cases of individual soldiers ignoring orders and “going rogue.” They involve reports of what appears to be a deliberate, troubling campaign and a deeply disturbing pattern of torture, rape, murder, and other atrocities. Those responsible for these atrocities – including those who ordered them – must be held to account.

Attacks like the April 28 missile strike on Kyiv demonstrate a blatant disregard for civilian lives. As of May 25, the United Nations has officially confirmed more than 8,628 Ukrainian civilian casualties while emphasizing that the actual toll is likely considerably higher. These numbers do not include Mariupol, a city in which officials said that more than 10,000 civilians have been killed. Among the victims in Mariupol was a 91-year-old Holocaust survivor, who perished in a basement during the Kremlin’s siege. Having withstood the Nazis, she lost her life to Russian aggression.

President Biden and Secretary Blinken have condemned the apparent war crimes Russian forces have committed in Ukraine. Slovenia also has repeatedly condemned the invasion while providing exemplary support to Ukraine including welcoming thousands of refugees, sending humanitarian assistance, and deploying additional Slovenian troops to support the Enhanced Forward Presence in Slovakia. The United States, the European Union, and our other Allies and partners are tracking and documenting atrocities in Ukraine, so we can share information with the institutions working to hold those responsible accountable for their actions. The United States is supporting a range of international investigations into atrocities in Ukraine. This includes those conducted by the International Criminal

Court, the United Nations, and the Organization for Security and Cooperation in Europe (OSCE). We are also supporting civil society and NGOs documenting human rights abuses.

On May 17, the U.S. Department of State launched a new Conflict Observatory to capture, analyze, and make widely available evidence of Russia-perpetrated war crimes and other atrocities in Ukraine. The program is intended to support eventual prosecutions in Ukraine’s domestic courts, courts in third-party countries, U.S. courts, and other relevant tribunals. At the request of Ukraine’s Prosecutor General, we are also supporting a team of international prosecutors and war crimes experts who are providing advice and support to efforts by Ukrainian authorities to collect, preserve, and analyze evidence of atrocities. We helped establish fact-finding efforts through the UN Human Rights Council as well the OSCE’s Moscow Mechanism. On April 13, the OSCE fact-finding mission published a meticulous and compelling account of Russia’s violations and abuses of human rights and its violations of international humanitarian law. It cited evidence of direct targeting of civilians, attacks on medical facilities, rape, executions, looting, and forced deportation of civilians to Russia. Ukraine’s human rights ombudsperson has reported that Russian forces held and repeatedly raped dozens of Ukrainian girls and women – some of whom are pregnant as a result – while stating the intent was for those victims to recoil from sex in the future and therefore never bear Ukrainian children.

There is strong international consensus that the conduct of the Russian state is intolerable and those responsible must be punished for unleashing such violence and for blatantly violating the principles that undergird international peace and security. Together with our Allies and partners, we will pursue accountability for war crimes and other atrocities perpetrated by Russia in Ukraine using every tool available, including criminal prosecutions, as appropriate. It is critical that the international community continue its coordinated effort to document these abuses, analyze the evidence, and ensure it is preserved and catalogued. Our simple message to Russia’s military and political leadership, as well as its military rank and file who commit war crimes or other atrocities, is this: the world is watching, and you will be held accountable. We will continue to do our best to provide Ukraine the means to defend itself, and we will continue to provide humanitarian assistance for those affected by the Kremlin’s brutal, senseless war.